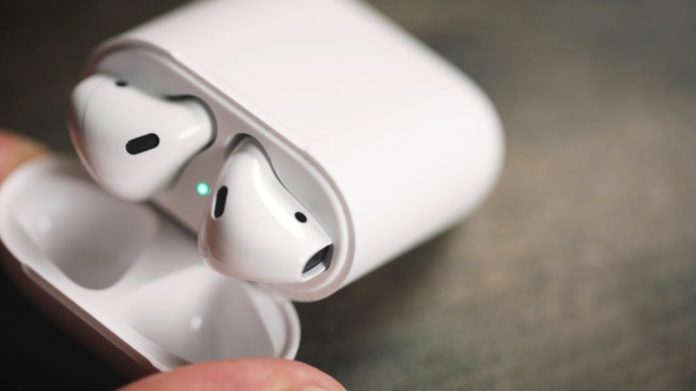 As you surely know by now, Apple’s announcement of its new iPhone 7 and iPhone 7 Plus came with a big surprise. Even though we heard numerous rumors that Apple is planning on removing the headphone port, this still came as a shock. As the Cupertino-based company said, the future is wireless, which is why we now have the AirPods – a pair of fully wireless Bluetooth earbuds.

The highlight of Apple’s AirPods pitch was that they are so great that users won’t mind losing the headphone port. We will try to test this claim in this article, where you can learn all you need to know about the AirPods if you’re interested in buying them.

It is also worth saying that the AirPods are finally available for purchase, nearly three months after the new iPhone’s release. Up until now, those of us who bought one of the newest-generation iPhones were forced to use an adapter that transforms the Lightning port into something that’s compatible with the traditional headphones and earbuds. Still, you are forced to continue using adapters (if you have a third-party product) if you don’t want to spend $160 on the recently introduced AirPods.

The design of the AirPods is simple, white, and typically Apple. In case you’ve used the company’s wired EarPods, which comes as standard with the company’s smartphones and iPods, then you’re already familiar with how the AirPods look. They are identical to the EarPods, minus any cables. The biggest difference here is the small arm which comes down from the earbud section. Due to the device’s battery and microphone, this part is significantly thicker than that of the EarPods.

It is worth noting that the AirPods aren’t the smallest Bluetooth earbuds out there. We’re all aware of Apple’s history of treading the line between technology and fashion, which is making me sure that Apple has done its best to create the smallest possible Bluetooth earbuds (at least for the first generation). This kind of design means that the AirPods rely on their one-size-fits-all plastic housing to keep themselves sat firmly in your ears. 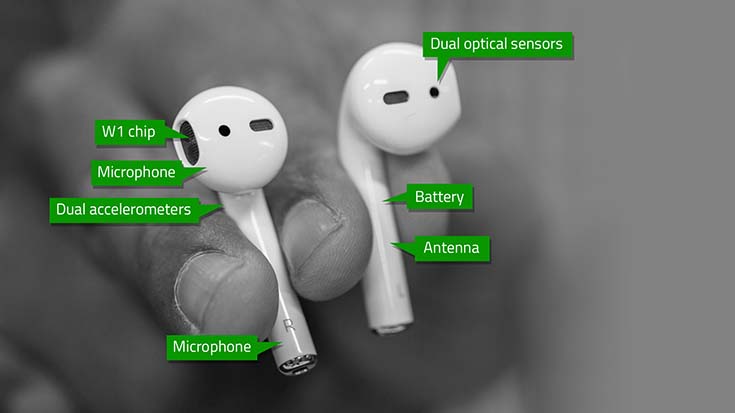 Perhaps the biggest question everyone has about the AirPods is how they fit and if they are prone to falling out of ears? We used the earphones on multiple occasions, during different kinds of activities. The conclusion is that you shouldn’t be worried that your brand new and expensive earphones will be lost if you go for a run. You can go dancing, running, working out in your gym, and doing pretty much anything you can imagine while being sure that the AirPods will stay put.

I have to say that the AirPods are definitely more comfortable than the EarPods. Maybe this has something to do with the added weight of the battery, but they perch right in my ear openings and stay put.

Now that we cleared your concerns about how the AirPods fit, let’s see what kind of sound they produce, as well as if you can use them for something else than listening to music.

Most of us aren’t audiophiles, so I am not going to talk about detailed specs and what they mean. Instead, this section of the review is for those who use average earphones to listen to music. In addition, I assume that you can tell good earphones from terrible ones, which is a skill you can achieve if you changed 4-5 headphones/earbuds and noticed their differences in sound quality. 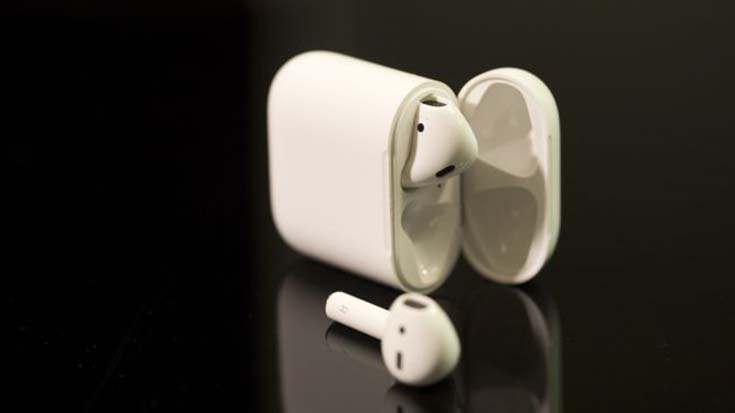 In comparison to the EarPods, the AirPods sound much better. The earphone’s sound has energy and rhythm to its, whether you like listening to soothing music or if you prefer something with a lot of basses. There is also a good amount of space in the soundstage, where you can clearly notice the layering of the orchestral backing. Instruments are able to share the soundstage without it feeling overcrowded.

It is also worth noting that the AirPods blow even the Lightning-equipped EarPods that come with the iPhone 7 in terms of sound quality.

When it comes to the outside noise, the AirPods come without a silicone or foam tips, which means that they won’t seal off outside noise as fully. If you have a smaller ear, there are good chances that you won’t hear as much of the outside noise.

The white stems that hang down from the AirPods hold the microphone, which you’ll need for voice calls and speaking with Siri. Even though the people I talked with while using the AirPods reported a slight echo, which is in common for many Bluetooth phone calls, the sound was good enough for calls. 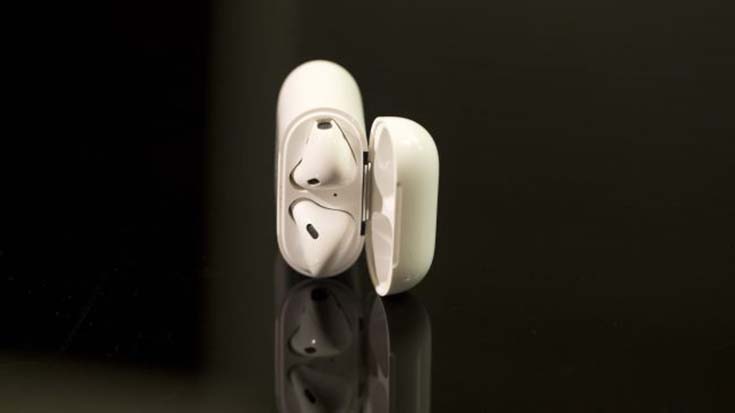 To connect the AirPods to your iPhone (as well as any other Apple device) you need to simply need to place the headphones and the case near your phone. Open the case, and you’ll see the option on your iPhone’s screen to pair them. And that’s it! The earphones will automatically connect every time you put them into your ears and disconnect when you take both out. In addition, this pairing information will be synced via iCloud to all your Apple devices.

It is worth noting that Android users are able of using NFC pairing for quite some time, so this kind of connectivity isn’t exactly new. After all, you still need to press the Bluetooth button on the charging case to get them paired, but after this is done they work without a problem.

The new earphones also come with their wireless processor, dubbed the W1. This processor is what makes the AirPods truly stand out. Thanks to the W1, all you need to do is to pop the earphones into your ears, and the music starts playing instantly. If you take one out, the music will pause. If you decide to continue listening to music, it will only play in mono on the remaining single headphone in your ear. Remove the other earphone, and the AirPods will pause the music and disconnect from your iPhone. This isn’t only convenient, but also saves the AirPods’ battery life.

Thanks to the W1 processor, you now have Siri in your ear. 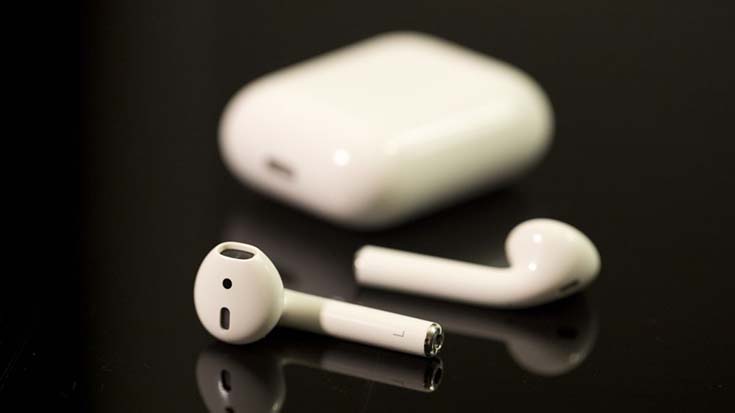 The biggest power of Siri is that the virtual assistant can control Apple Music and your own music collection stored within this app. Apple is being restrictive when it comes to third-party apps, so you won’t be able to control your music within any other iOS app. Some apps are a bit better than others, where Spotify allows you to turn up the volume using the intuitive controls, and skip to the next track. This can be a big issue if you don’t use Apple Music, but instead, completely rely on applications like Spotify and Pandora.

Outside of music controls, you can use Siri for voice-dialing to make calls, as well as to get answers to various types of questions. Still, it feels more intuitive to pick up your phone and ask Siri to do something. The bottom line here is that Siri is more capable on your iPhone than on your AirPods, even though many of us will agree that Siri isn’t the best virtual assistant out there.

As said earlier, the long stems found on the bottom of each earbud contain small, rechargeable batteries. Even though they might be a bit bulky, the plus side of that bulk is that the AirPod’s battery life is amazing.

Apple claims that you’ll get five hours of battery life from the AirPods, which turns out to be completely true. You can check the earphone’s battery life on your iPhone at any time using the Battery Widget in iOS 10. In addition, Apple also claims that the charging case provides 24 hours of battery life, where in just 15 minutes the case can provide enough energy to your AirPods for more than three hours.

When it comes to the charging case, you can charge it via its Lightning port. Once fully charged, the case can recharge the AirPods over four times. There is a small LED underneath the charging case’s lid, which glows red or green to indicate the AirPod’s charge status.

The bottom line here is that the battery life of the AirPods is amazing and much better than the competition. And yes, there is a tradeoff here, but I think it’s safe to say that Apple did right when decided to place a bit larger batteries and create a bulkier design.

Ever since they were announced during this year’s September Media Event, the AirPods created polarized opinions. Everyone wanted to know how they feel while being used and if they should be afraid of losing them easily. 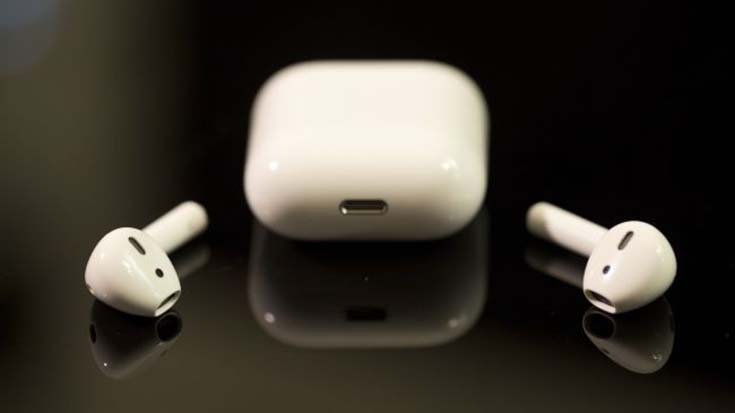 However, as it turns out, the AirPods are an amazing product. There is really a lot of like here, like the product’s effortless connectivity. They are also very clever in terms of functionality, whether you like the look of them or not.

We also mustn’t forget to mention its cross-device use via iCloud and automated start/stop controls based on whether one or both AirPods are in your ears. This is something that’s unique to this product, so it could be said that Apple is setting the benchmark for a wire-free future.

If you’re looking for an innovative Bluetooth earphones for your iPhone 7, pick the AirPods. You won’t regret this decision.