Homeapple-newsApple's MacBook Event: The Touch Bar and Everything Else...
apple-news 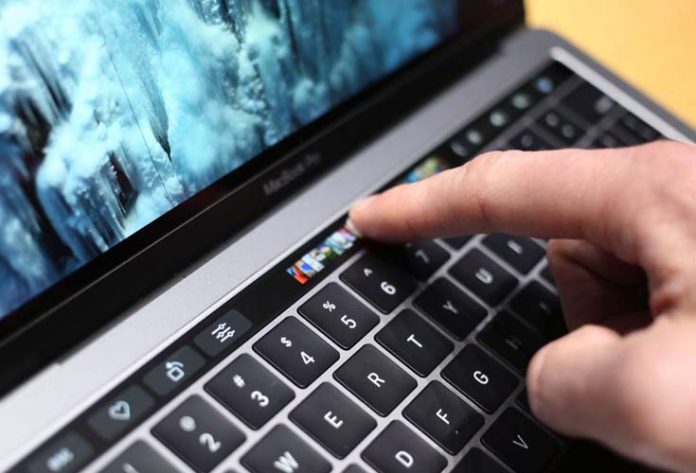 In case you haven’t been following Apple-related news these days, you’ve probably missed that the Cupertino-based company held its Mac-oriented Media Event on October 27. Only one month ago, Apple held a Media Event, when the iPhone 7 was announced, along with the Apple Watch Series 2. Still, the previous Media Event wasn’t as exciting as most of us wanted it to be, mostly because of numerous rumors that ultimately turned out to be true.

When it comes to yesterday’s Media Event, things are a bit more exciting. Apple’s latest keynote focused on the Mac and the company’s effort to transform TV. So, without further ado, let’s jump right in.

Those of you who were waiting for a major MacBook Pro refresh will be happy to hear that Apple finally heard your prayers. The company managed to bring numerous improvements, even though it’s clear that the biggest new feature is the Touch Bar. First, let’s see what kind of design and specs the new machines bring.

The design itself has been slimmed down from the previous model, with Apple saying that the new model is 14-17 percent thinner and almost a half-pound lighter. You can choose from two screen sizes (13-inch and 15-inch), as well as from two colors (silver or space gray). In addition, you can count on the Force Touch trackpad and an updated second-generation butterfly switch, both transferred from the 12-inch MacBook. 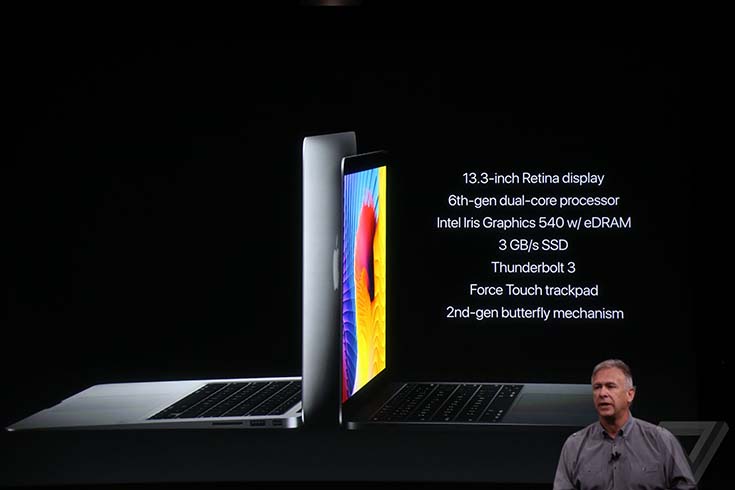 When it comes to the high-end model, Apple is offering a quad-core Core i7 processor, AMD Radeon Pro graphics with up to 4GB of video memory, and up to 16GB of RAM. The smaller, 13-inch model, offers either Core i5 or i7 processors, and an Intel Iris GPU. All of these models bring 4 USB-C Thunderbolt 3 ports, which can be used to charge the computer, along with a 3.5mm headphone jack. However, the SD card is nowhere to be found.

As previously leaked, the new MacBook Pro comes without the function keys and replaces it with an OLED touch strip that Apple is calling the Touch Bar. This was the biggest surprise of the Apple’s keynote, where the company went far and beyond to try to persuade us that the Touch Bar is a groundbreaking piece of technology.

The Touch Bar actually consists of the Retina display that replaces the keyboard’s function keys while responding to touch and different kinds of gestures. It changes with software, so you should see a different set of options for a web browser or a photo editor, to name a few examples. When it comes to Safari, the Touch Bar brings up bookmarks, the option to add a new tab, move between tabs, or navigate to a different website. Once you open the Photos app, you will see the standard editing controls. Users can swipe across the OLED bar to preview photos, change filters, or resize. 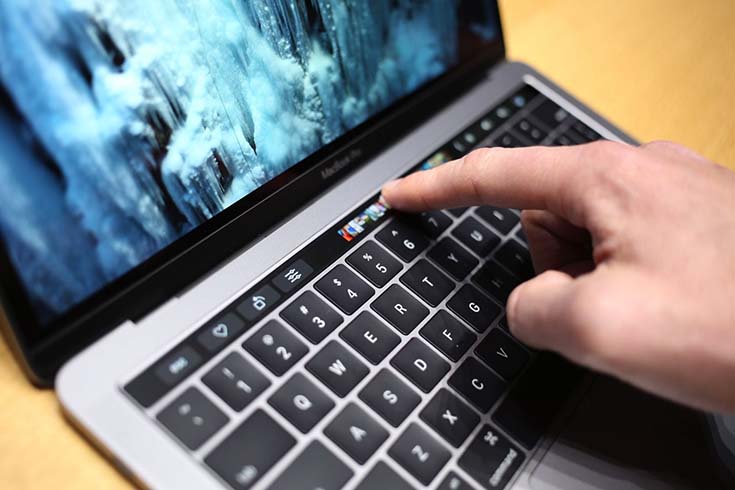 Apple also said that the Touch Bar can show default apps, similarly to the Dock, including system controls, which can be accessed by holding down Function key on the keyboard.
What is also worth noting is that developers will be required to add support to feature within their applications. The upcoming Final Cut Pro comes with the Touch Bar support, along with Adobe’s Photoshop and DJ Pro. Furthermore, other applications with announced support include Microsoft Office, Pixelmator, Sketch, and DaVinci Resolve.

Touch ID has finally found its way to the Mac. It is found next to the Touch Bar, built right into the Power button.

What is interesting to mention is that this feature uses the same second-generation Touch ID from the iPhone 6S/7 with a sapphire cover. Furthermore, it includes a new T1 chip with a local secure enclave for Apple Pay security. What this means is that you will be able to buy things online using Apple Pay and Safari (other web browsers don’t support this feature), by using your finger to authenticate purchases.

Apple also made sure that Touch ID is multi-user compatible. What this means is that you can set up a number of different accounts and associate fingerprints with them. This way, macOS Sierra will instantly switch to your desktop (once you place your finger over the sensor) and you will get to see your applications and your Touch Bar.

The new MacBook Pro comes with a brand-new display. The new Retina displays are now 67% brighter and bring 67% more contrast and 25% improvement of the color gamut. What these numbers mean is that you can clearly see the difference when it comes to the new MacBook Pro and its predecessor. Sadly, as Apple had discontinued its Thunderbolt display, we won’t be able to see these improvements being transferred to a standalone monitor.

What About the MacBook Air?

Sadly, the beloved MacBook Air didn’t get any love today. What this means is that Apple decided to make a shift when it comes to its notebooks, which probably means that the Air will be probably sidelined in the future. However, there are a couple of good reasons why this is going to happen.

Along with the shiny MacBook Pro with the Touch Bar, the company also announced a new entry-level variant of the 13-inch notebook that comes without the OLED strip and offers only two USB-C Thunderbolt 3 ports, starting at $1,499. It is interesting to highlight that the new 13-inch MacBook Pro is actually thinner and smaller than the older MacBook Air.
Still, the MacBook Air is a good option for those of you who are on a tight budget, even though we are not sure if any Apple’s notebook is the most affordable machine there is.

Apple also made sure to spend a few minutes talking about its Apple TV.

As you probably know, one of the most prominent features of the newest Apple TV is its ability to download, install, and run applications. This is why the company has been looking for a way to enhance this experience in order to ease up the process of authentication. Meet a new “TV” app.

The TV app is a unified hub for content across all the apps you have installed. The app utilizes a single sign-on method, so you can be automatically signed into new applications as you add them to the device. Aside from tvOS, the TV app will be available for iPhones and iPads as well. You can expect it to be publicly available through a free update, later this year.

You can also expect from Siri to become smarter. Once the next update hits your Apple TV, you will be able to tell Siri what kind of content you’d like to watch, and she will find that content by combing through the available apps. For example, if you say that you want to watch the Chicago Bears game, Siri will find an app that is playing it, and it will open the app for you.

What Happened to AirPods?

Just before the Apple’s keynote, we received an interesting piece of information about the recently unveiled AirPods.

When Apple announced its first wireless earbuds, the company said that they will launch in late October. However, the AirPods are delayed. 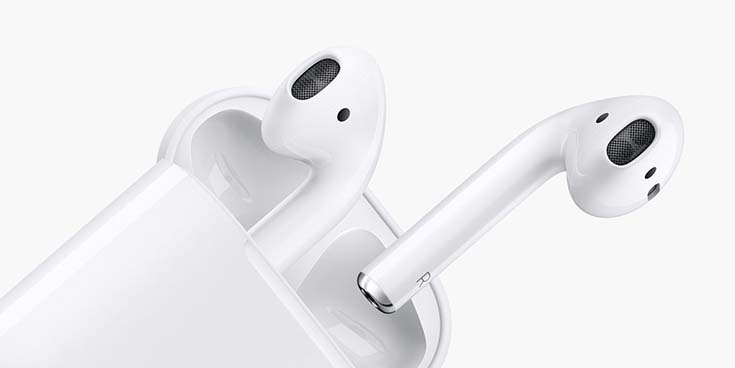 TechCrunch was the first to reveal this information, citing a source at Apple. However, the company failed the provide any information about a new launch date, which is worrying. Here is the full statement: “The early response to AirPods has been incredible. We don’t believe in shipping a product before it’s ready, and we need a little more time before AirPods are ready for our customers”.

As we previously said, Apple announced that Microsoft Office will be one of the first professional-grade apps that will support the Touch Bar functionality.

Today, Microsoft has detailed how this functionality will work. By using the Touch Bar, Office will use the most common commands, all based on what you’re currently doing in the document. This works with applications like Word, PowerPoint, Excel, and Outlook.

When it comes to Word, the application will actually hide the on-screen ribbons and commands, so you will only see your document on the screen. All of the relevant UI will be placed in the Touch Bar, with buttons like copy/paste, bold, italics, underline, and more.

PowerPoint will allow its users to “easily manipulate graphic elements”. There will be some features, like a button called “Reorder Objects” that will make it easy to find the exact object you’re looking for and move it to a new location. Objects can be rotated and scaled by sliding a finger across the new Touch Bar.

We all know that Excel can be quite frustrating at times. Even though this is one of the best applications of its kind, it’s not actually as punitive as many of us would like. The Touch Bar should help with some of the most common functions, so you can make changes quickly. In addition, you will be able to format your cells easily, since there will be options to add a border, cell colors and recommended charts propagating on the panel.

This kind of early adoption from Microsoft shows how the company cares about its OS X-users. This is not the same Microsoft as it was several years ago, and we are happy to see the company embracing new technologies.

The Touch Bar and Boot Camp

In case you’re running Windows by using Boot Camp, you must be wondering what will happen to the Touch Bar once you boot into Windows.

As said by Apple’s software engineering chief Craig Federighi, the Touch Bar will likely display virtual function keys between F1-F12, along with the Escape key. Furthermore, the virtual power button will be also functional, as you might expect, but you won’t be able to rely on Touch ID.

Just like with the 12-inch MacBook, Apple has decided to remove the backlit Apple logo on the new MacBook Pro models. In its place is a glossy logo in black for the Space Grey model, and in white on the Silver model.

It’s interesting to note that Apple’s first notebook with a lit-up Apple logo was the third-generation PowerBook G3, released back in 1999. I am sure that many of us will miss this iconic feature.

The new MacBook Pro models won’t come with Apple’s Power Adapter Extension Cable in the box. The extension cable, which provides extra length between the power brick and wall outlet, will be available as a standalone product, priced at $19.

The Touch Bar’s brightness is not manually adjustable. In fact, it will be using the notebook’s built-in ambient light sensor. In case you own an iOS device, you know this features as “Automatic Brightness”.

We don’t know for sure how well this is going to work, so it will be interesting to keep an eye on this detail once the first MacBook Pros start shipping to customers. 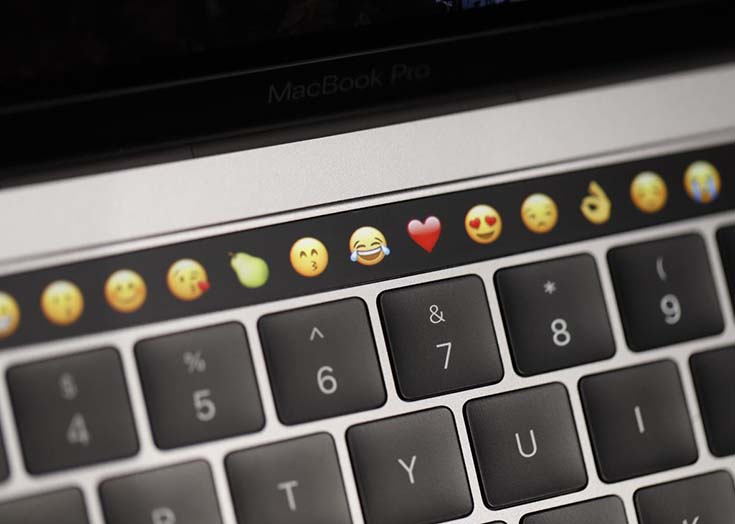