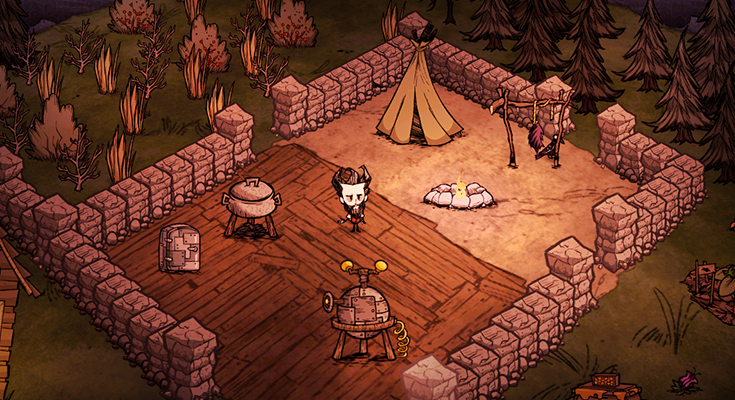 From time to time, a game becomes so popular that it influences other developers to create similar games. Sometimes this can be a good thing, especially if a developer decides to offer something new and to upgrade well-known mechanics. As you probably know, this also leads to numerous imitations and clones, which is just a cheap way for developers to sell their games (at least in my opinion). However, this kind of inspiration can be taken to a whole different level, which can create a game even better than the original. As you are about to see in this article, we will be talking about a game which takes a well-known concept and pushes it in a whole different direction.

In this article, I will tell you about a game that seems to be inspired by Minecraft and other similar survival games. However, Don’t Starve takes things further and manages to create its own path and identity. Furthermore, the game manages to set a certain mood which is an amazing achievement. Let’s see what Don’t Starve offers and if it’s worth the asking price of $4.99.

In Don’t Starve, you play as Wilson, who is a scientist with an (obviously) amazing haircut. He gets inspired by a malicious demon to create a fantastic machine. However, he ends up being swallowed by his creation, so he ends up in an offset world where he needs to struggle to survive. The character would die unless you help him, and unless you keep him sane, healthy, and full. 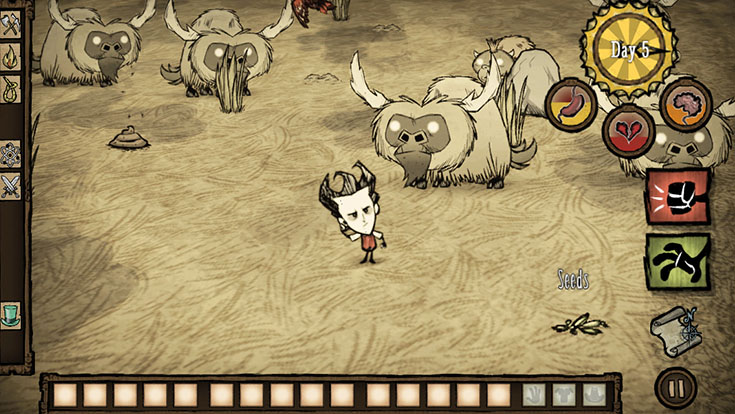 The game starts out pretty strong by introducing you to the most important aspects and showing you that you need to take action immediately. What you need to keep your eyes on is the Hunger meter in the top right of the screen. Wilson will be surrounded by woods, populated by animals like rabbits and birds. As you start to move and explore, you will see that there is something peculiar about that world. This wilderness and weirdness are what makes this game successful. Soon enough, you will see tentacles that pop out of the ground or the walking eyeballs. This is where you will see that your Sanity meter takes a hit.

The game’s Sanity meter adds another layer on top of the survival aspect. At times, you will have to eat monster meat or do other weird stuff, where your decision affects the Sanity meter. Once it gets too low, Wilson will start seeing a shapeless ghost floating nearby as well as normal-looking animals that turn into grotesque monsters.

As can be seen, Don’t Starve is not just a survival game, even though this is its core. You also have to protect your mind, or otherwise, you will go crazy. This goes hand in hand with the game’s haunted feel, which seems to be very close to a Tim Burton movie. Don’t Starve seems to be hand drawn, where even some monsters look cute until you realize that they’re about to disembowel you. The various effects like rain, fire, and lighting are what makes this game come alive.

As said before, this game takes inspiration from Minecraft. In its core, Don’t Starve is all about gathering resources and running away from monsters. You will have to keep your eye on the Inventory system at the bottom of the screen. This is where you can see different elements that can be accessed promptly in order to build something. The crafting menu also works great, with the various icons positioned on the left side of the screen showing you the many recipes. This is where you can see what Wilson can and cannot craft, so you will always know what kind of materials are missing. 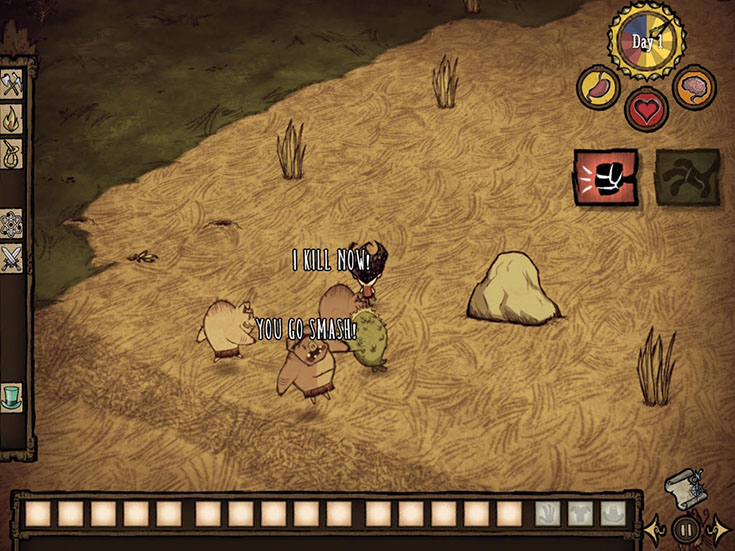 When it comes to crafting, you will spend a lot of time trying to build something. This whole system is, as I believe, more intuitive than Minecraft’s. You can always take a look at the available recipes, where you will see if something is missing. In addition, when you approach your science machine, for example, the extra crafting options pop up immediately. In the beginning, you will struggle to build something very simple like a torch or pickaxe, but you will soon see that you can build some crazy machines like an Electrical Doodad and Ice Flingomatic. The crafting menu is there to help you chart a course through the game, so you can choose your own path. 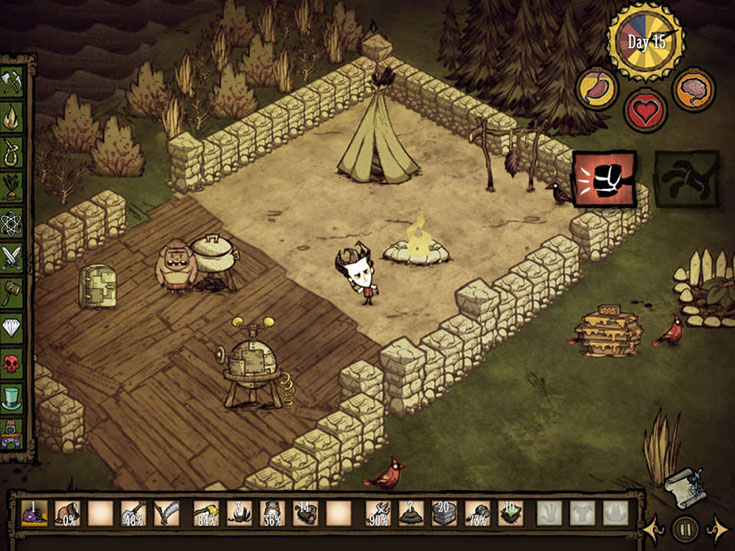 Don’t Starve comes as a universal download from the iOS App Store and can be yours for $4.99. It also includes the Rise of Giants DLC which adds the Wetness game mechanic. There are no additional DLCs at the moment, but I am sure they’ll be released soon. This will also add on to the game’s replay value, which is high enough even in the current state. I highly recommend downloading this title.

Now, the final question is if Don’t Starve is worth your time and money? My answer here is that if you like survival games, then definitely. The game is very deep when it comes to its gameplay, and it can easily take many hours for you to discover its numerous secrets. The game also comes with a high level of replay value. The game’s sandbox nature allows you to fine-tune its work by adjusting the length of specific seasons, changing the size of the world, and altering the frequency of phenomena like lightning storms and more.

The game is priced at $4.99, and trust me that this money will be well-spent. Even though it’s currently iPad-only app, it seems like an iPhone version should be released soon. Head over to the iOS App Store and start crafting!