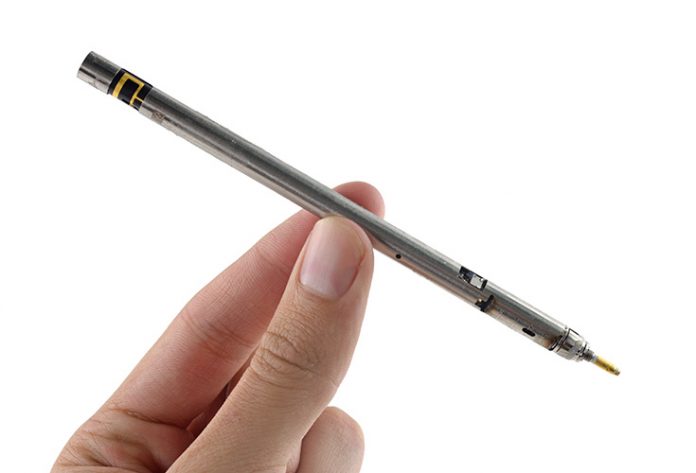 Just like with every new Apple product release, iFixit has managed to get the iPad Pro’s fancy new stylus and pull it apart. In case you are curious about how Apple constructed their first iOS-compatible stylus, we are going to give you some of the most interesting highlights.

The teardown experts at iFixit had to cut the Apple Pencil in order to access its insides, which in turn broke the flex cable. Interestingly enough, the stylus has an inner housing made of metal which protects all internal components. Inside this housing, they found the batter, the pressure sensor for the tip, and a logic board that iFixit says is the smallest they’ve ever seen. The logic board weighs only 1 gram, where Apple had to fold it in half in order to get it inside the stylus.

Apple Pencil features an ARM-based CPU and Bluetooth Smart radio, and Fixit also discovered that the tip of the stylus has two emitters that detect the angle and orientation the device is being held at.

As expected, iFixit gave the Pencil the lower possible score in terms of ability to be repaired. This was obviously due to the fact that the stylus needed to be cut in the first place, which means that Apple Pencil is not meant to be repaired in the first place. However, this should not worry anyone since the stylus is very quality made and you will unlikely break it even if you keep dropping it on the floor.