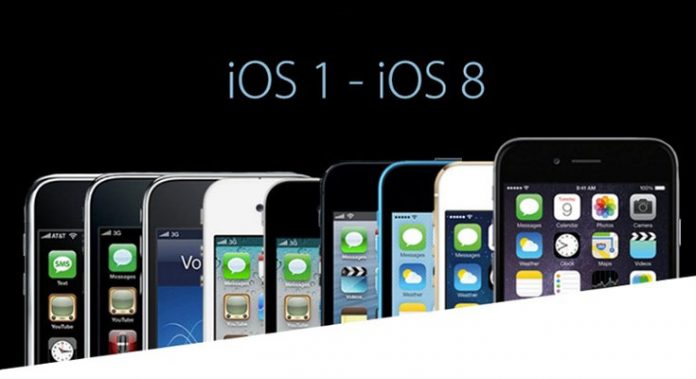 iOS is arguably the greatest mobile operating system of the world. Since being introduced back in 2007 for the very first iPhone, iOS has been providing an outstanding experience to the iDevice users with its unique and highly-efficient features.

Ahead of this year’s  World Wide Developer’s Conference (WWDC), we have decided to celebrate the potential release of a new version of iOS with a story of its evolution, covering all the notable features of its every update.

Let’s find how the iOS has been evolved to revolutionize the mobile industry.

iOS 1.0-The Start of Evolution

The very first version of iOS was revealed on June 29, 2007, along with the first model of the iPhone, by none other than the founder of Apple-Steve Jobs. The operating system was being equipped with an advanced keyboard which supports multi-touch operation feature.  It provided the users with faster experience than any other operating system available on the market during that time. The operating system also featured the iTunes Music Store, allowing the users to download their favorite songs directly to their iPhones. Another important feature was the introduction of the Mobile Safari, which was the most efficient web browser to surf the net at the particular time.

However, the iOS 1.0 lacked several essential features, including external memory card slot, stereo Bluetooth, wireless iTunes syncing and most importantly 3G. Nonetheless, the operating system achieved an impressive score of 4.5 out of 5 points to win the Editor’s Choice award. More significantly, it marks the initiation of the revolution of the global mobile operating system.

iOS 2.0-The Beginning of the Age of Apps

iOS 2.0 was publicly released on July 11, 2008. It is arguably called the most significant operating system of the iDevices , as it guided us to the age of apps with the inclusion of the App Store for the very first time. With the app store, the iOS users could download a wide variety of apps, including the 3rd party software,  directly to their devices. Unlike the previous version, the iOS 2.0 offered 3G support for the iPhone.

The GPS feature was applied in the iOS 2.0, enabling the users to enjoy the location services effectively over network and Wi-Fi. The camera software was updated to v2.0, allowing the users to geo-tag and capture photos of improved quality. A scientific calculator was applied, which was able to perform complex calculations. Another important feature of the iOS 2.0 was the inclusion of Active Sync, which was capable of pushing data, including e-mail, calendar and contacts,  from a Microsoft exchange server to the iPhone.

There were a large number of built-in apps, including weather, clock, texting app and YouTube, in which the features remain almost unchanged. The home screen also looked quite similar to the previous version.

Being released on June 27,2009, the iOS 3 came with a huge number of new features, including push notifications for apps built by third party developers, in-app purchases, parental controls and MMS. The new Spotlight Search option was included, which was capable of finding particular content in the iDevice efficiently. It also had the camcorder, through which the users could record videos as well as capturing images. Again, the iOS 3 enables the users to cut, copy and paste the text, an essential option that was absent in the previous versions. However, the most innovative feature was the “Voice Control,” allowing the iPhone following the user’s voice command for performing particular functions, including making phone calls.

The second version of the iOS, v3.2, marks the beginning of Apple’s tablet. It was the very first operating system to be ever used in the iPad. Due to the large size, Apple had to transform the interface with several new design features, including extra panes and sidebar lists, that fit with with the wider iPad screen effectively. The user interface received a major upgrade with the introduction of a new concept, called Skuemorphism, which offers the glossy rich textured icons. More importantly, the user interface was built with a view to impersonating the reality with a Skeumorphic cycle.

iOS 4.0-The Introduction of FaceTime and Game Center

Being introduced on June 21, 2010, the iOS 4.0 became the very first operating system to be used in the iPhone with Retina display. It came with tons of new features, including FaceTime for making video calls, folders for organizing apps efficiently and Game Center for playing and sharing games with friends. The new AutoFocus option was included, allowing the iPhone camera lens to focus automatically while capture photos and record videos in high definition. Another significant feature was the introduction of the multitasking menu.

iOS 4.0 had a major problem, called the “antennaegate” issue, which decreased the signal bar significantly while the users had grabbed their iPhones. However, the issue was fixed with the release of iOS 4.0.1.

Apple launched iOS 5 in December 10, 2011. The operating system was released in such a time when the android operating system had been dominating the mobile market. Replying to android’s massive threat, Apple implemented a number of innovative features in the iOS 5, including Newsstand, through which the users could  download and read their desired news articles on their iDevices, iTunes synchronization over Wi-Fi, and a new cloud service, called iCloud, through which the content of a single iDevice could be a viewed in multiple iDevices.  However, the most important feature was the voice assistant app Siri, which replaced Voice Control app for performing different functions, including texting, scheduling meetings and setting phone calls, by following the voice command of the user.

Despite having so many outstanding features, the iOS 5 had a major issue with the battery performance, as the users expressed their frustrations, stating that the operating system had decreased the battery life of their devices significantly. However, the issue was solved with the release of iOS 5.0.1 update.

Being released on September 19, 2012, the iOS 6 came with not only the enhancement of the existing functions but also with the new features. The FacTime video calling through 3G/4LTE was made possible, which had been restricted earlier to only the Wi-Fi network. The Panorama mode was included for capturing 360 photos. Another important feature was the Passbook, a one-stop repository stop for gift cards, boarding passes and tickets. However, it was the introduction of Apple Maps that captured the headline, as it marked the controversial removal of the Google Maps from the iOS.

Being launched on October 6, 2013, the iOS 7 had been packed with revolutionary features. The AirDrop feature was included, which enabled the secured transfer of files between the iDevices through Bluetooth and Wi-Fi connection. The multitasking option was improved, allowing the iDevices to keep all the requests of app updates in a group and activate the download only after detecting the appropriate strength of internet connectivity. The layout of the camera app was updated, along with the enhancement of speed. The new “burst” mode was included, which enabled the users to capture photos with continuous shots. The FaceTime audio was introduced, through which the users could make high-quality audio calls through 3G, LTE and Wi-Fi. The skeumorphic design of the icons had been changed to flattened graphics, colorful gradients and transparencies. However, the most innovative feature was the Touch ID, which had granted access to the iPhone by scanning the fingerprint of the user.

Despite being equipped with the revolutionary features, the iOS 7 contained a major issue in Apple Maps, which misguided the users to the incorrect destinations, even to the airport runway! Apple CEO publicly apologized for the issue.

iOS 8: The Initiation of the Health App and Apple Pay

iOS 8 is the latest operating system for Apple’s mobile devices, which was introduced on September 9, 2014. It comes with support for third party keyboard, family sharing option for enabling the parents to pay for the products bought by their kids, iCloud Drive with advanced storage options and Continuity feature for simultaneous operation of different iDevices. For the very first time, the Health App has been included in the iOS, which allows the iPhone to track different fitness data, such as: blood sugar, heart rate, cholesterol etc. However, it was Apple Pay which captured the headline, through which online transactions can be performed with NFC securely with the help of Touch ID fingerprint scanner.