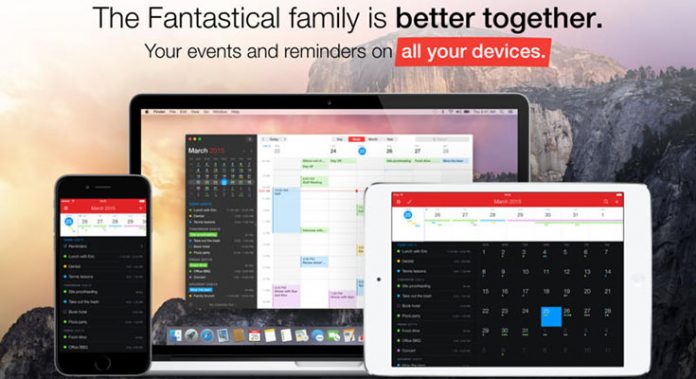 Apple’s own Calendar app is one of the most used applications on my Mac. One of the first things that I really liked when I switched from a Windows-powered PC to OSX, which happened many years ago, is ability to use built-in apps to help with my everyday activities. OSX’s applications are designed to effortlessly work together, which can be also done on any Windows PC, but with a level of dedication to overcome complexity and lack of intuitiveness. Even though the next generation Windows, due to appear in less than two months, promises to change this, OSX is many steps ahead and it never occurred to me to switch back during all this time.

As I said earlier, one of the apps that I use throughout the day is the Calendar app, and I am sure that many of us use iOS’ and OSX’s calendars to track appointments and add reminders. As a reviewer, I tried a number of third-party apps that promised to replace the built-in OSX’s Calendar, but I haven’t found an app that I continued to use in the long-term. However, as you’ll see in this article, this recently changed once I tried Flexibits’ Fantastical 2.

In case you ever searched for a calendar app for your iPhone or Mac, you must have noticed some of Fantastical’s editions. The first version of this app appeared in the OSX App Store more than three years ago and included an app that lived in the menu bar, right next to your clock, WiFi, and battery status. Once clicking on its icon, you were able to see a compact month view above a scrollable list of appointments and reminders. This app didn’t try to replace the built-in Calendar app, but instead it offered a solution to those who wanted easily accessible calendar with basic functions. With the introduction of Fantastical 2 for Mac, this completely changed since the developer now offers a full-featured and full-sized app, with numerous improvements and enhancements. Continue reading to learn more about this incredibly interesting application.

Right from the first launch, I was impressed by Fantastical’s visual style. This application brings nicely designed flat UI that works great with the latest OSX version. In fact, you can easily mistake this app for an Apple-designed app, and it even received an award for its UI design (2015 Apple Design Award). The app uses red, black, and white as primary colors, replacing any kind of skeuomorphic textures and imitations. In case you used the iOS version, the interface will feel instantly familiar.

When it comes to the main app, on the left side of the window you’ll see a sidebar that lists all your events and reminders, clearly sorted out and color-coded. This is where you can change between days and months, and switch between different calendars. On the right you’ll see a detailed view, where you can go into different views (Days, Weeks, and Months) and make any kind of changes. The sidebar and the main view work together, so you’ll see a change happening in both parts of the app, no matter where you made that change. Thanks to color-coded UI elements, Fantastical 2 seems very natural and intuitive, and definitely brings much clearer structure than Apple’s Calendar app. It also manages to bring and show a lot of data at once, without making the interface overcrowded and difficult to comprehend. 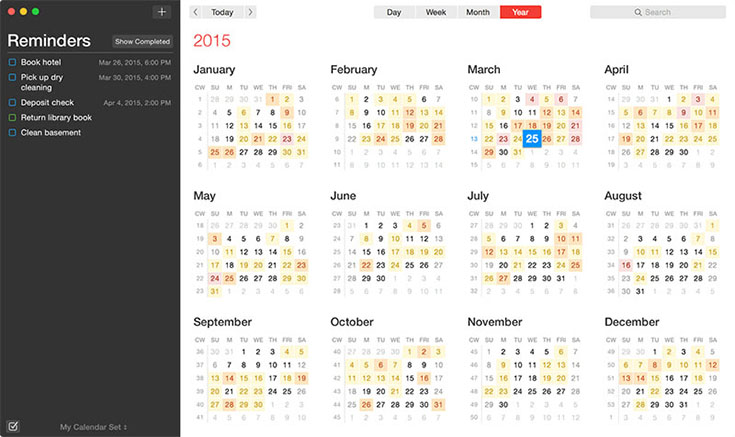 Despite being more complex than before, if you liked to use the menu bar app, then you’ll be very happy with the newest version as well. The app’s menu bar icon is still available and works just like before. In addition to a much nicer UI, you can still click on the icon and you’ll see an overview of the current month, along with a list of upcoming events. You can add a new event via natural language input, edit any existing entries, and then simply go back to your work.

When it comes to the mini app, the big difference from the original app is that the menu bar can now be detached and dragged around the screen. This is great if you need to have a calendar app on your screen at all times, but don’t want it to take a large portion of the screen. Simply drag it around the screen, make it larger or smaller, and then drag it back to the menu bar when not needed.

One of the biggest innovations in Fantastical 2 is the feature called Calendar Sets. As the name says, you can create several calendars and effortlessly switch between them. You must be wondering what’s interesting about this, since any calendar app supports having more than one calendar. With Fantastical 2, you can create groups of calendars and reminders that can be easily switched between and combined. This is great if you have multiple calendars for Home and Work, so you can be much more productive than before. You can use the predefined hotkeys to switch between these, or you can click on All Calendars at the bottom of the sidebar and choose the set you want to use. In addition, Fantastical can track your location and automatically change between calendars, which seems incredibly helpful.

What’s worth mentioning is the fact that Fantastical 2 is tightly connected to OSX, which includes a Today Widget, share extension, and Handoff support. OSX’s Notification bar features Fantastical’s Today view widget, where you can preview your appointments and access the app, along with iCloud Reminders. This widget looks much better than Apple’s own. You can use a system-wide share extensions, so you can create new entries within apps like Safari, Maps, and Notes. And finally, in case you own the iOS version, you can use easily transfer data using OSX’s Handoff feature.

I’ve been using Fantastical 2 for a few weeks now, and this is the first calendar app that will completely replace Apple’s built-in Calendar. This is a very logical choice since this app is much more capable and brings several incredibly innovative features, so I am not even considering going back to the old Calendar app.

In case you’re interesting in using Fantastical 2, the price in the OSX App Store is $50. You can currently purchase it for $40, which still seems incredibly high priced. I am sure that many users will be put off by this price, and I sincerely hope to see this price lowered, especially for those who use Fantastical for iPhone or iPad. However, you can try it for free (21-day trial), and then decide if it’s worth the price.