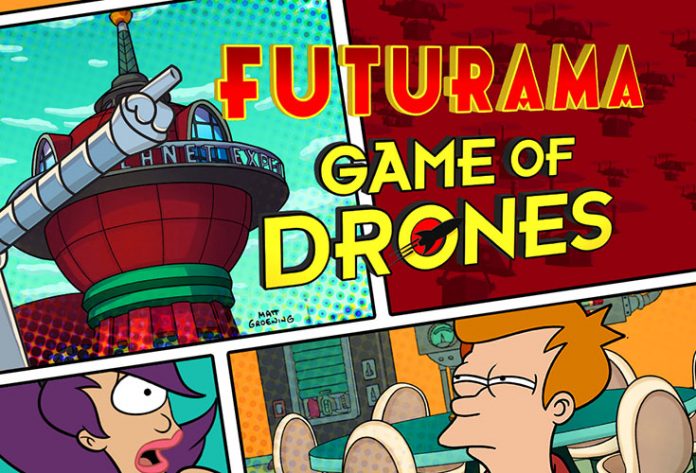 I am sure there are a lot of Futurama fans out there who have been waiting for the official Futurama iOS game. Well, the good news is that the highly anticipated mobile game has finally arrived, but the bad news is that it’s a bit different than what most of us expected, as well as the fact that there are some problematic performance issues.

Futurama: Game of Drones was released by a developer studio called Wooga, and it’s free of charge with the popular freemium model of gameplay. This is a match-four puzzle game, which should appeal to Futurama fans who like the matching game genre. Continue reading to learn more about this iOS game.

When it comes to the visuals, the good news is that Game of Drones comes with the well-known classic style of the cartoon series, including the intro movie. The level selection screen is reminiscent of the show’s opening intro along with the well-known theme song. 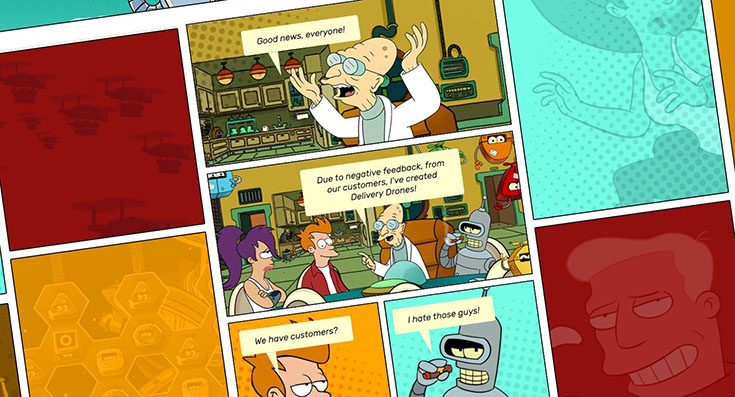 The graphics are very colorful and flashy, with a lot of shiny moments happening on the screen. I really like how the game stays true to the original art style of the TV series and manages to bring beloved characters of this popular cartoon. If you’ve been missing Professor Farnsworth and his one-liners, I guess you’ll you will feel a lot of nostalgia once you hear once again the all-time favorite: “Good news, everyone!”.

In addition to the plot, you will feel like you’re playing a new TV episode, which is why I am sure the hardcore fans will be mesmerized. In addition, throughout the game, you will get to see and hear lines from various Futurama characters that are commenting your gameplay, which is a nice touch.

Like with any other match-four puzzles, you will have to strategize and think a bit before making your move. There’s really not that much difference between match three and four, but it gives you a little extra to think about.

What’s interesting is that the levels are all in oddly shaped grids, so there’s something different with every single level. To move a piece, it must be swapped with any adjacent piece, but it needs to end up in a group of at least four like colored drones. This will clear out the entire group. In case you make some more complex moves and clear out at least five or more pieces, you will get to see a special kind of drone-like line-clearing drones and color-detonating drones. You should be definitely aiming at achieving a higher score and unlocking these specials drones since sometimes this can be the only way to pass a level. 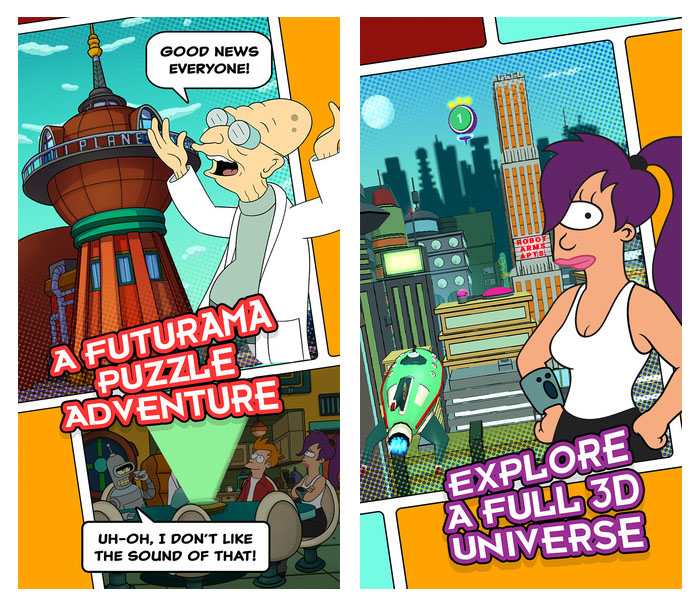 As you make progress in the game, you will get to see special levels with unusual enemies. These can be enemy drones that will be sent your way. This way, both sides take turns to make matches and can attack the other by matching a special kind of drones. More complex levels will bring all kinds of power-ups connected to various Futurama characters. This adds a lot of variety, and I am sure you’ll spend a lot of time replaying different levels.

Speaking of variety, I would also like to add that Futurama: Game of Drones does a fine job of adding new pieces of mechanics, so there’s always something new to explore. Some levels will require you to match a certain number of drones, while others will require to clear out slime from underneath each tile. If you loved to play Candy Crush, then you will be happy to hear that some levels will have you moving a pizza box to the bottom of the screen. As you can see, there’s always something new and interesting to play, as well as a reason to come back to the game.

This game comes free of charge, and it uses the freemium model. This means that you can’t freely play the game without spending some money. The good news is that you can actually play Futurama without spending a dime if you are patient enough. What this means is that there’s life system slowing you a little, and you’ll see some ads from time to time. 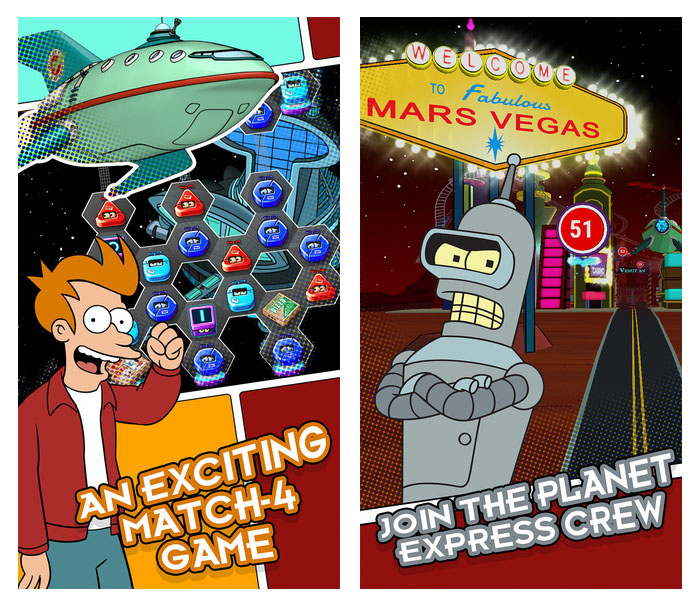 However, the game doesn’t really force you to see these ads, so it’s nothing too obtrusive. It should be also said that even though I experienced some difficulty spikes, you can definitely play a game without spending anything on hints and such. As always, I recommend spending a couple of dollars if you truly like the game.

Since Futurama: Game of Drones is a free-to-play game, you can play it without spending any money but you’ll have to wait for your lives to regenerate. This takes about half to an hour, to a couple of hours at the time. I also experienced several crashes, and the game completely froze a couple of times. However, after I force-closed the game and restarted it, I’ve seen that I’ve lost one of the available lives.

I am a big fan of Futurama and I’ve been waiting for a long time to see the official iOS game. I am also glad to see the developer taking this direction since the game is very fun to play. However, what is troubling are the performance issues. I really hope to see these fixed soon.

All in all, Futurama: Game of Drones does a great job of presenting a match-four puzzle that managed to stay interesting and addictive. On top of that, I am sure that many Futurama fans will be more than happy to download this game and re-experience a couple of funny moments that Futurama characters are known for. However, I wouldn’t recommend this game to those who are not fond of puzzle games, and I think this one won’t convince you otherwise.