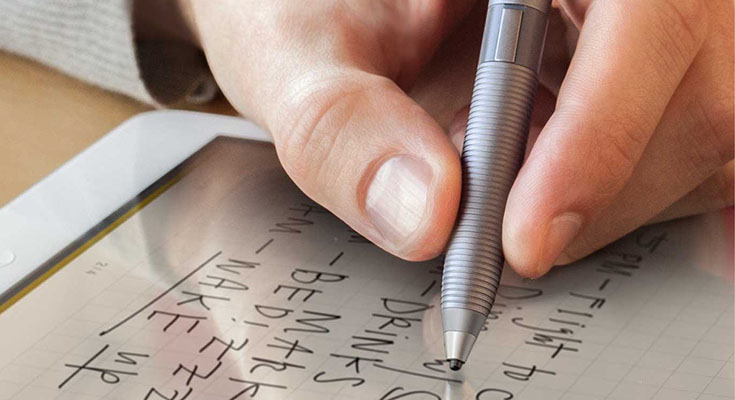 A while back, I managed to get the original Jot Script and I had been loyal to this product for a long time. I managed to get this stylus right after it appeared on the market, even before numerous apps and services upgraded their support. During the past two years, Adonit succeeded in making their Jot Script even more attractive by working with third-party developers and some of the well-known companies that showed their support and made their apps work flawlessly with this stylus. This was needed due to newly introduced touch-sensing technology, which the iPad Air 2 brought. In case you have been using a stylus with a previous iPad model, you must have noticed certain problems with your older but always reliable stylus. The iPad Air 2 made a switch to a more precise touch-sensing technology, so as a result we now have a range of electronic stylus with more capable features. Now it is time to take a look at the Adonit’s next generation stylus, simply named as Jot Script 2 (Evernote Edition).

As someone who used the original Adonit’s stylus for a while, I immediately noticed thinner dimensions of the new stylus. This is because it uses integrated battery that can be charged via USB-powered charging dock, instead of a single AAA battery that we saw earlier. According to Adonit, you can expect anywhere from 20 to 50 hours of battery life, which depends on a device you are using. In case you plan on using it with the iPad Air 2, you can expect approximately 25 hours of active use, which seems fair enough. Another interesting innovation that came with the rechargeable battery is a side-mounted USB recharging dock, where you can simply place the stylus on top of it. This is great if you are using an Apple’s notebook, but it can be a problem if you use one of iMac models. You will probably need to supply a USB extension cord, or you can plug the dock into a wall charger, just as you plug in your iOS device. In case you use the iPad Air 2, you can expect 20-25 hours of battery life, the same as with the iPad Mini. It only takes about 45 minutes for the stylus to be fully recharged. 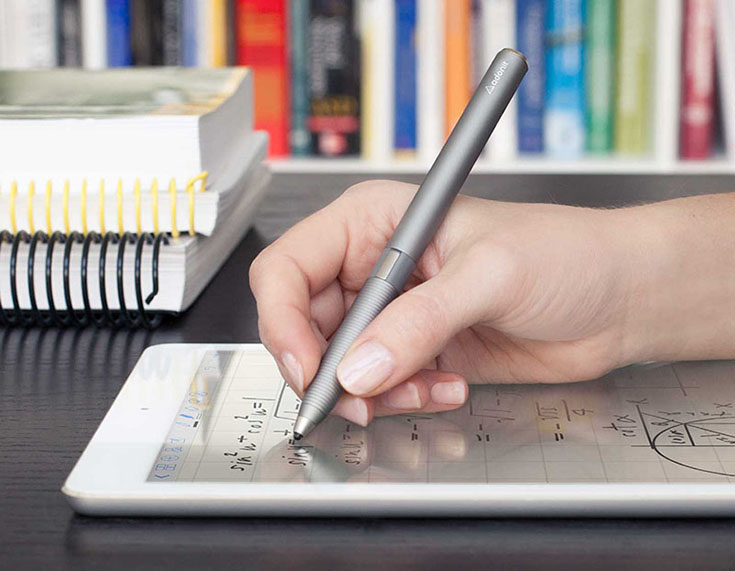 I am happy to say that Jot Script 2 seems very quality made, constructed of aluminum with a chrome-plated tip. It is about 5.5” long, and only .41” in diameter. There is also the tiny 1.9mm tip, where the same one found on the original Jot Script. If you take a look at the current Adonit’s lineup, you will see that Jot Script 2 lies somewhere in the middle. Entry-level styluses usually don’t bring any electronic internals, while top of the line products bring Bluetooth 4, pressure sensitivity, shortcut buttons, and rechargeable batteries. Jot Script 2 is electronic and brings Bluetooth 4, along with the rechargeable battery, but unfortunately, there are no shortcut buttons.

What is also improved with the newest generation is the way you connect it to a tablet. Instead of using the iOS’ settings to pair devices, you can use a drawing- or a note-taking app. This way, once you are finished creating sketches, simply close the app and the Bluetooth connection will be suspended. When you open the app once again, you can immediately resume drawing. As expected, this can be done using one of supported drawing and note-taking apps. In case you use a non-supported app, you can still use your Jot Script 2, but you’ll need to pair it with your iPad the old fashioned way and you won’t be able to get any advanced features. 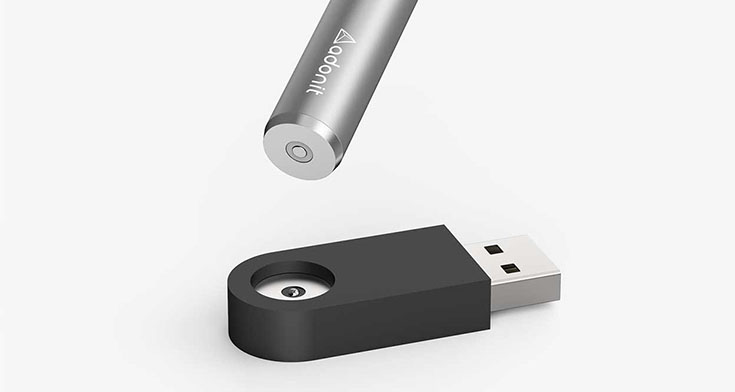 When it comes to performance, not much has changed comparing to the first generation. This is still one of the better styluses, great for note taking and drawing as well. However, professional illustrators might not be impressed with this one, since it lacks finely tuned pressure sensitivity. This is because Adonit has another stylus made for professionals who need the best tools. Most people will be more than happy with Jot Script 2, since it features reliable performance, high accuracy, and improved palm rejection. When you purchase this stylus, you will also receive six months of Evernote premium service, which is a very powerful note-taking app that can used across different platforms. Some of the other supported apps are Notes Plus, GoodNotes 4, and Penultimate. GoodNotes is the app that supports all of the advanced features of this stylus, as well as Evernote’s premium note-taking app.

Even though I did not experience any problems with this stylus in terms of pressure sensitivity and reliability, the only thing that wasn’t working 100% was palm rejection. I needed to be careful while writing something one the iPad’s screen in landscape mode, since my palm would sometimes interrupt my writing. I am not sure if this is a problem with software, or if can be fixed through an update, or perhaps this has something to do with the hardware. Due to this, I would not recommend Jot Script to those who would like to draw and illustrate, however the product is perfectly reliable for note taking.

Even though it is clear that Jot Script 2 is an improvement over its predecessor, improved battery life and somewhat improved performance might not be enough to persuade users to upgrade. However, even though the stylus is still priced as before ($75), you will now receive six months of Evernote Premium service. I am sure this will be enough to persuade new users to make the purchase as well as existing users, who are mostly very happy with the Adonit’s bestselling stylus.